1999START OF THE CONSTRUCTION
2016END OF THE PROJECT
57KILOMETERS TUNNEL LENGTH
12.2B. CHF OVERALL COSTS

At 57 kilometres in length, the Gotthard Base Tunnel is the longest railway tunnel in the world. Its construction took 17 years and a total of 28.2 million tonnes of rock were removed. It allows passage at speeds of up to 250 kilometres per hour and significantly shortens the journey time on the transversal of the Alps from north to south. Amberg was involved in the project for many years, implemented the ventilation of the tunnel and was responsible for the design and construction supervision of several lots and various additional infrastructures.

The structure consists of two single-track tunnels, which run over 57 kilometres from Erstfeld to Bodio. The construction was divided into five sections, in two of them so-called multifunction stations with emergency stops were built.

Quality and durability are the top priorities in ventilation

Ventilation forms a central basis for the operational safety of the base tunnel. The assignment for Amberg consisted of implementing the operational ventilation for the entire infrastructure, including the access tunnels and auxiliary rooms in all operating conditions.

The Gotthard makes complex demands on the ventilation system: availability, quality and service life are elementary components for ensuring safety. Optimum escape conditions in the event of an incident, for example a fire, are guaranteed as follows: The damaged train stops at one of the two multifunction stations (MFS). Each of these MFS has two emergency stops, which are connected by an overpass. These tunnels allow escape into the other tunnel tube. The escape tunnels are pressurised by an independent fresh air supply and harmful fumes are extracted. If a train is no longer able to reach the MFS, passengers can escape into the other tunnel tube via the cross passages. The ventilation puts the event tube under negative pressure and the counter tube under positive pressure. This creates safe areas for the passengers.

The tunnel is equipped with supply and exhaust air fans at the multifunction points and the portals. Furthermore, exhaust openings, jet fans, escape doors as well as control and monitoring systems were built.

The works in Sedrun

The Sedrun section is 6.8 kilometres long and has a maximum overburden of 1550 metres. Amberg was responsible for project planning and site supervision within the engineering consortium.

Amberg also planned and implemented two 800-meter deep shafts in Sedrun to enable the intermediate attack to be carried out. One of the shafts was used to transport electricity and machinery as well as the excavated material, while the other was used for heavy-duty transport and ventilation.

One of the two multifunction stations is located at Sedrun.

The second MFS was built in Faido. It has an underground station for emergency stops and is 1.7 kilometres long. It allows trains to change tunnels in both directions. Safety is ensured by cross passages, caverns, an emergency stop and the aforementioned air extraction system. Amberg was also responsible for site supervision and project planning here.

Another part of the project for Amberg consisted of the two lots Bodio and Faido. Here too, responsible for site supervision and project planning, Amberg was able to demonstrate its unique expertise despite various challenges.
Alpine geology, massive tectonic fault zones and an overburden of up to 2300 metres produced high rock temperatures of up to 44° Celsius, which, together with the sheer size of the construction project, the long project duration and complex logistics, required many innovative solutions.

The new portal in Faido

It impresses with its interesting architecture, the tunnel portal in Faido. Behind the facade made of fair-faced concrete are the installations for the operational ventilation and the railway technology of the southern section of the Gotthard tunnel. For this above-ground infrastructure, Amberg also took over the project planning and site supervision in an engineering consortium.
The other companies of the Amberg Group were also strongly involved in the construction of the Gotthard Base Tunnel. Read about the innovations in the field of concrete technology and 1:1 trials from the Hagerbach Test Gallery in the tunnel. Amberg Technologies has also provided valuable services. 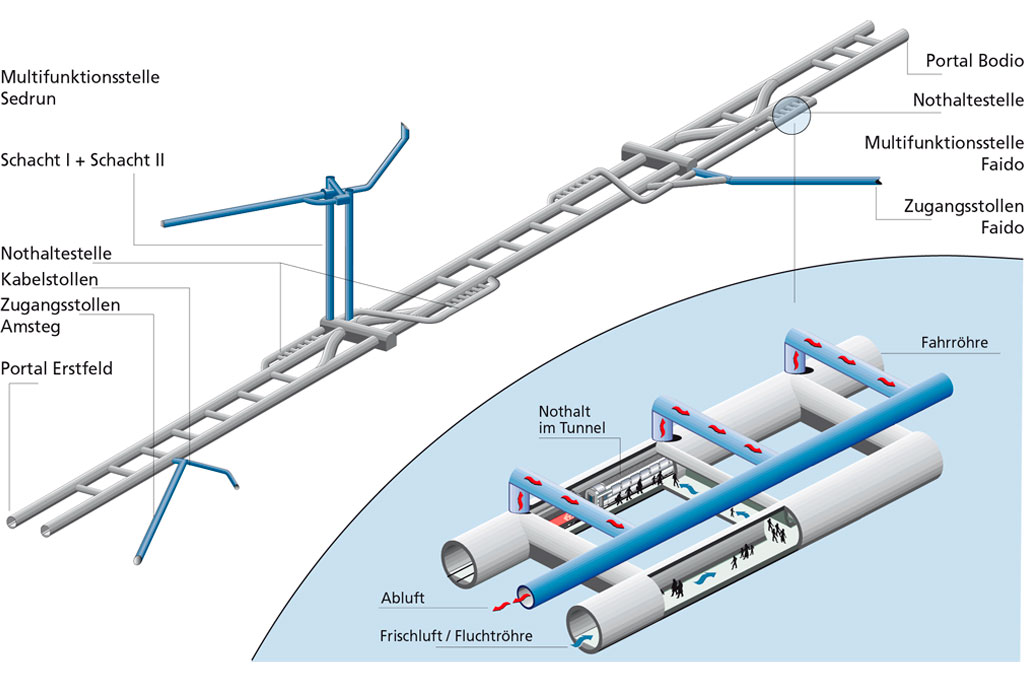 Overview of the Gotthard Base Tunnel

Axial fan in the Gotthard tunnel 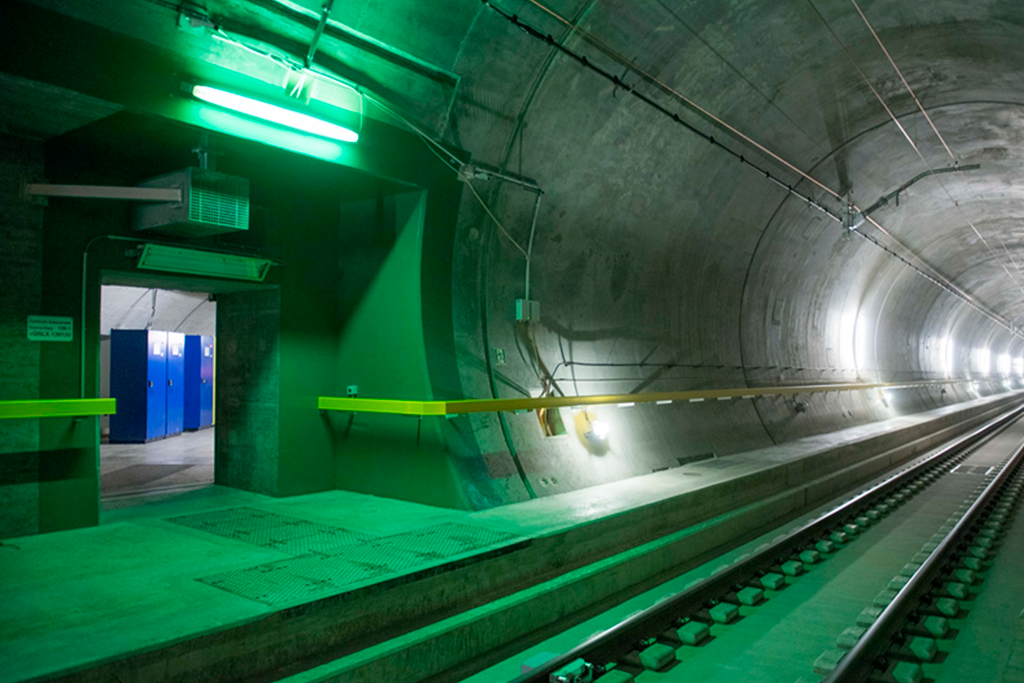 The multifunction station in Faido

Securing the heading in the Sedrun section 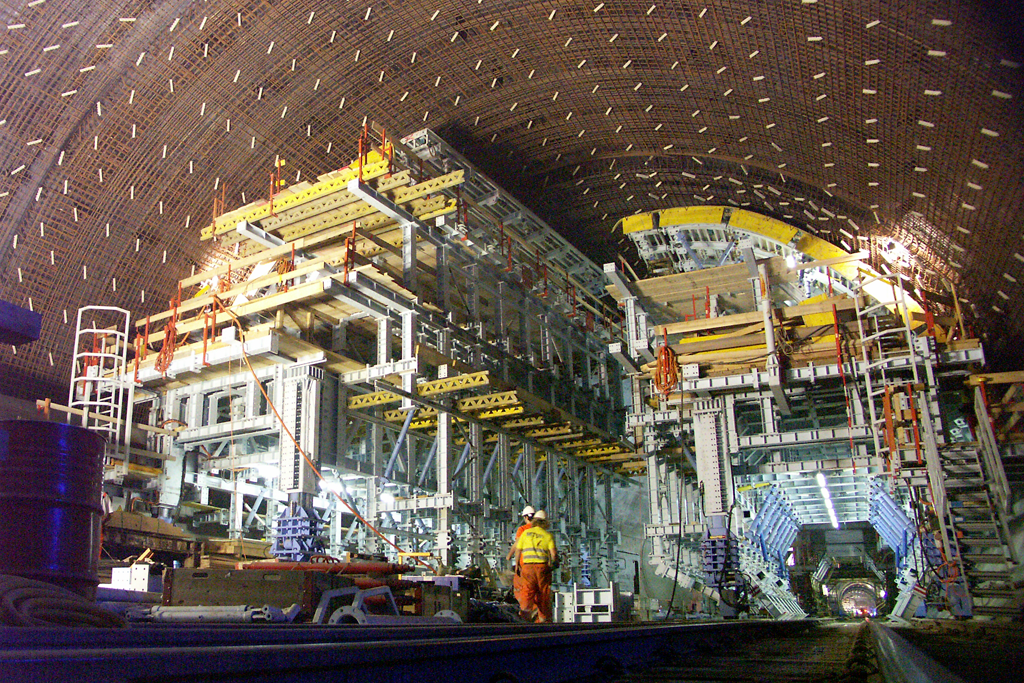 Formwork in the Faido section 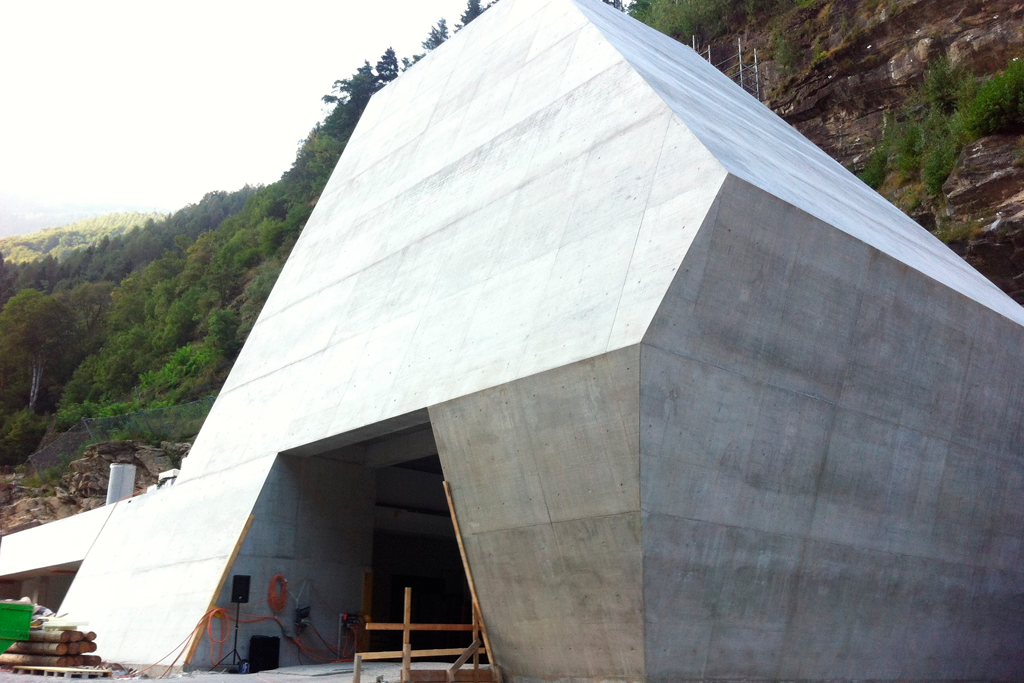 The portal building in Faido